The mobile retail market is exploding! 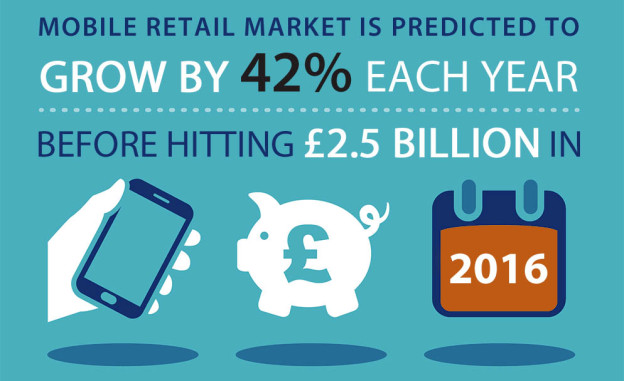 The mobile retail market is predicted to grow by a staggering 42% each year before hitting £2.5 Billion in 2016.

Research carried out by eBay has suggested that there has been significant growth in consumers making purchases through their mobile devices. This rise is set to be fuelled by the rise in smart phone usage and the number of retailers who are developing easy-to-use mobile apps.

The increase in smart phone usage and a growing familiarity with technology will encourage consumers to become more confident in using their mobile phone to make purchases.

It is expected that up to 14 million adults will shop on their mobile phone by 2016.

Online shopping accounts for 17% of the total retail market, with the increase in smart phone usage this is set to increase revenues for retailers’ substantially increase over the next three years.

E-ticketing is set to receive the biggest growth rate at £545m followed by vouchers and deals at £198m.

This massive growth is set to be helped with introduction of a 4G network in the UK, with faster connectivity leading to an upsurge in people making purchases made through their mobile devices.

Smart phones are now allowing for a new kind of retail market to grow in the UK. Yet 95% of small businesses do not even have a mobile responsive website, the market is wide open to help these businesses to go mobile.