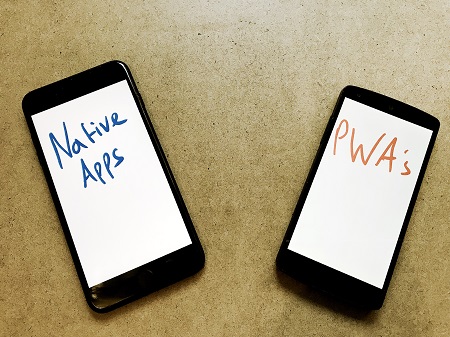 The only main option for building a mobile app was going native or hybrid, however, an exciting new option has emerged that has revolutionised both apps and websites at the same time, its called Progressive Web Apps, a Google-sponsored technology. Now small businesses can easily provide its customers a rich app like user experience, compared to the big boys on a small budget.

What is a Progressive Web App (PWA)?

Progressive Web Apps are essentially advanced websites, however, do not behave like a traditional website that lacks the native-like functionality of an app. Progressive Web Apps do not require downloading and installation.  PWA’s promote the user to save the web app easily on the home screen same as an app and can operate within most browsers, including Microsoft Phones. PWA’s offers greater functionality than traditional websites, always up to date and can even work with a poos connection.  Above all it can send out push notifications.

What is a Native App?

Native Apps are apps developed for a mobile OS – either Android or iOS who jointly dominate the mobile OS market. Native iOS apps are built in Objective-C / Swift while Android apps are written in Java. However many app building platforms can produce a native app feature, if not hybrid which we will cover below.

What is a Hybrid App?

Hybrid apps operate in the middle ground between a native and a HTML5 web app. Essentially, hybrid apps are web apps that are downloaded from the app store. This is done by ‘wrapping’ web code within some native code to allow for certain functionality, such as access to the phone’s in-built camera etc. However, Apple sometimes does not like this and can reject an app if its weak on utilising the native features of a iOS device.

It’s also worth pointing out another technology, React Native, also operates in a middle ground between hybrid and native. As Facebook mentions on GitHub, ‘With React Native, you don’t build a “mobile web app”, an “HTML5 app”, or a “hybrid app”. React Native uses the same fundamental UI building blocks as regular iOS and Android apps.

So What’s the Difference?

Progressive web apps are cheaper, faster to develop and deliver, compared to native apps and provide an all round mobile web and app solution in one simple go. PWA’s offers access to push notifications, which are crucial to keeping people engaged with your app after initial usage and offers functionality and updates, another key benefit of apps.

Essentially PWA’s do not require a download from an app store, which makes them more attractive to first-time users or those not wanting to install an app for any reason, so there is less friction and more upside for small businesses.

If this sounds to good to be true, here are the catches:

Firstly, although PWA offers much of the same functionality apps downloaded from the app store do, this is not to say they offer all of the same functionality. They cannot be integrated with phone features such as Bluetooth, fingerprint sensors, a little slower but still a lot better than a website. Now web apps adopted SSL security that adds greater data protection which is a big cost bonus.

Possibly the biggest plus is that PWAs are a Google initiative, backed by Microsoft and although there is currently no support for Safari browser on iOS at the moment, Apple has plans to release a webkit (service worker) to give PWA a big boost.

Native Apps offer optimal performance and ability to deal with CPU usage that PWAs cannot match. This is necessary for apps that rely heavily on creating, editing and watching media, or gaming apps, etc, but if your app doesn’t require high performance, then it is the case, how easy your app is to use will also impact how much people use the app. This is where platform specific UI and UX that native apps offer can really make the difference. Designing specifically for iOS or for Android will make your app easier to use and look more in-line with the other apps on a user’s phone.

Which is the Right one for Me?

If your business is developing a platform that you expect users to need to access weekly or monthly rather than daily on both web and mobile then a PWA app is the most cost-effective way forward.

Eventually, if a business is successful with aPWA, then a transition to a native app can easily work, but only if your budget allows this and you feel its important, otherwise a PWA for simply functionality purposes, especially for small business should be just right.

Hybrid Apps are a less costly way for any small business to enter the app stores. App builders like The App Office are a relatively quick and low cost way to launch an app, and these can have some native qualities.

A hybrid app will allow you to test an idea and give you time and funds, if needs be, to create a native app, when you ready. However, these apps have a rough approval record on Apple stores and eventually will be squeezed out by PWA’s.

Native Apps are ideal for start-ups  ho wanting to create a game or media focused application, or for more established businesses with a name and reputation to protect who wish for their app to reach a greater audience.

So which is it?

If you’re thinking about a native app think about whether a PWA could be your answer in case you want to upgrade your website so you get the best out of both worlds if you have a small budget. However, dependant on the business type you may require both native and PWA’s to ensure your business requirements match customer expectations.

The choice is yours, but here at The App Office we can help!